The JLGC Seminar (previously Japan Day Seminar) is an annual event organised by the Japan Local Government Centre to raise awareness of Japan’s cities and regions, providing a real-time opportunity to exchange information and ideas on local government policy and best practice concerning both the UK and Japan. 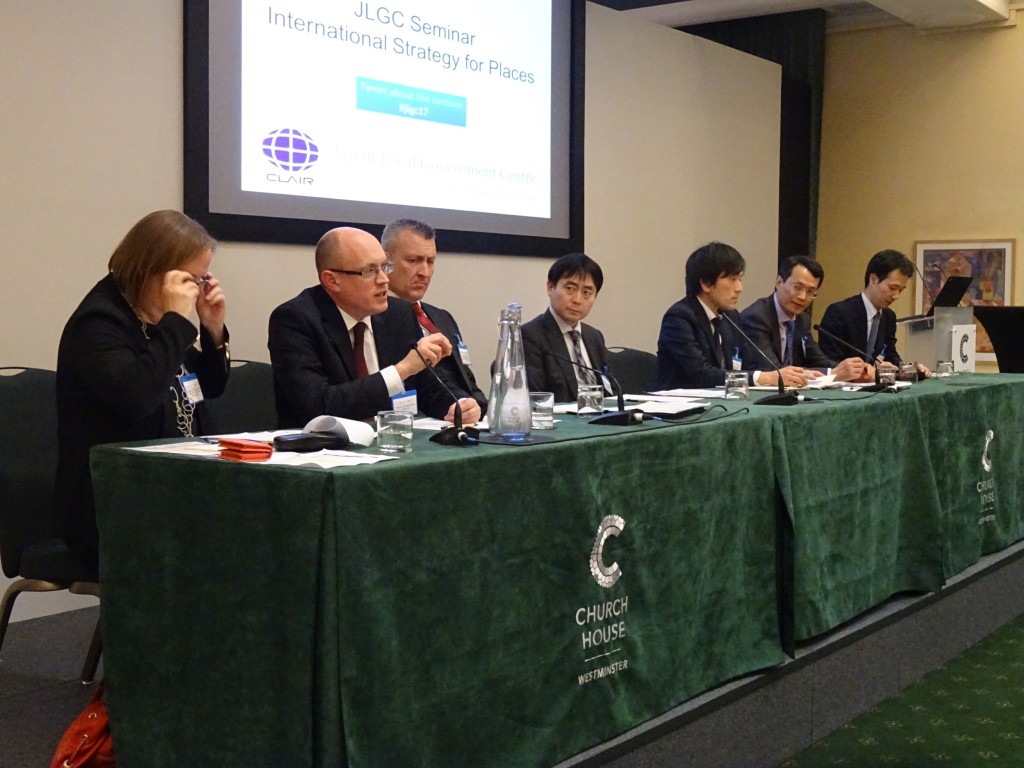 Rob Gorton of Toyota Manufacturing UK responds to questions during the panel discussion.

Over 70 professionals from UK and Japanese government, business and academia gathered in Westminster’s Church House, with the event being chaired by Sue Hudson, Director of Business Development at Fujisankei Communications International. Her introduction to the seminar emphasised the importance of both countries learning each other’s culture, paying tribute to the JET Programme as an example of how the participants return to the UK from Japan with a wealth of knowledge.

JLGC Director Kazuya Shima opened the seminar with a brief introduction of JLGC and was followed by Minister Jotaro Horiuchi from the Embassy of Japan providing the opening remarks, highlighting the state of Japan-UK tourism. He noted that Japan was a trending destination for tourists from the UK with 293,000 visitors in 2016, the highest to date, however he also mentioned that there was a decline in visitors from Japan to the UK, and in light of this announced that he will be collaborating with UK tourism boards to promote tourism on both sides. In addition to tourism-related activities, the Minister also stressed the potential that Japanese businesses can bring to the UK on top of the 140,000 jobs that have already been created, outlining that the Embassy of Japan is also collaborating with various UK organisations to increase further investments.

This kindly led to the next presentation by Daisaku Yukita, Director of Japan External Trade Organisation (JETRO), who gave an overview of Japan’s regional economies and the organisation’s collaborative efforts with local authorities in Japan. Director Yukita gave a comparison of eight regions in Japan that had GDP equivalent of European countries and showed how niche companies across Japan commanded high global market share for their products, some of which were monopolies, and expressed that there are many more hidden champion Japanese SMEs that have huge potential but lack a global connection. This was followed by an explanation of the National Strategic Special Zone strategy and how local authorities used this to their advantage – the stand out example being Fukuoka City using the deregulation system to support foreign entrepreneurs with Start-up Visas. The core of JETRO London’s activities lies with their business matching services with local governments included, and rounded the presentation by urging UK businesses and organisations to use JETRO as a starting point for business with Japan.

Attracting FDI into the UK: Collaboration between LEPs, central and local government
Department for International Trade

Martin Phelan from the Department for International Trade (DIT), or in his words “the JETRO of the UK”, picked up the baton switching the discussion to a UK perspective on foreign investment. As the DIT Northern Powerhouse International Director, Mr Phelan briefly described the role of DIT in helping to raise the profile of businesses from the north of England, ensuring that they are represented on the same level as the rest of the country to provide foreign investors more options to make the best decisions. As DIT is the pipeline for feeding investments from overseas through to the national and then local level, overseas DIT teams targets specific companies and form special relations with cities and regions to “win it for the UK”.

Moving from trade organisations, Takashi Yanagisawa of the City of Yokohama Frankfurt Representative Office gave the first presentation from a local authority. The city has clear aims to expand its emerging and aging markets as well as increase its international presence by 2020. Priorities include strengthening the city’s brand through attending international conferences; city-to-city cooperation; growth through tourism, MICE and sporting events; attracting foreign companies and supporting SME’s; and international youth exchanges. These priorities are reflected in the activities of the overseas Frankfurt office and have targeted various German companies from laser manufacturers to language schools. Upon closing, Mr Yanagisawa stressed that “It is important that Yokohama grows with the world through creating mutually beneficial relationships in the international community for Yokohama’s citizens and the world. In order to do so we have to strive to have an open mind towards the world and have a positive attitude to be involved with the world”.

Jeff Cao, Head of Asia Pacific at London and Partners, was next to take the spotlight giving an insight on the state of Japanese investment in London. We learned that Japan has remained one of the top five investors into London and is in the top seven for largest tourist markets. Breaking Japanese FDI down by sector, food and drink projects were the highest accounting for 21% in 2011-2016 and the popularity of Japanese cuisine is evident as it now ranks seventh highest out of all foreign cuisines in London. The topic of Brexit was unavoidable and despite the fears of the referendum result, Japanese investment grew and 64% of Japanese companies hatched the foreign exchange risk, thus making them “better prepared for a post-Brexit world”. Post-Brexit London can still be expected to be a leader in financial services and further grow its tech sector, an area which Mr Cao sees potential for greater collaboration between London, UK and Japan.

The next presentation by Richard McGuckin took us north with a look at Stockton-on-Tees Borough Council’s international strategy. The first half of the presentation gave a general overview of Stockton highlighting its domestic and international transport links, the importance of the River Tees, the historic high street and the numerous grand events that are held. The latter half focused on their business related activities which entails a 15-year growth strategy and a more defined three-year growth plan. The council has made some bold investments including a £17m development of a new Hilton Hotel, which will be fully owned by the council, as well as a £10m project to re-open a 1935 art-deco theatre and a new leisure centre which will cost £11m. Regarding the borough’s Japanese investments, the council has benefited greatly from three manufacturers – Lucite International, Nifco and Fujifilm, with all three combined providing over 1,400 jobs, a figure which is likely to increase with the expansion of Fujifilm. In the case of Nifco in particular, the success was brought about by a combined effort with the local government that resulted in a £30m investment to expand the site and secure further employment at a time when the company was having financial difficulties. In Mr McGuckin’s closing he emphasised Stockton Borough Council’s strong relationship with Japanese companies and has further deepened its Japan ties with JLGC.

Kiyokata Kume, Deputy Director of East Japan Railway Company London Office, was the first of the final two presentations that gave a perspective from Japanese companies. JR East is the largest passenger railway company in Japan and receives 32% of its total revenue from non-rail business which is labelled as “lifestyle business” by the company. This includes a number of business operations in and around the stations that cater for various needs from consumer level shopping centres and fitness clubs, to office space rental and advertising aimed at businesses. On the international front, they have established an international technical consultancy service known as Japan International Consultants for Transportation (JIC), and along with the London Office have four other global offices. As well as marketing activities, the UK office collects information on the UK passenger railway industry which has led to the acquisition of a Pre-Qualification Questionnaire (PQQ) passport enabling them to participate in UK passenger rail franchise bidding competitions. They have also been offering technical advisory services for HS2 Limited, the UK’s high speed rail project. Aside from business activities, Mr Kume highlighted the community development initiatives that the rail company is involved with in Japan – these include tourism promotion in areas that are in need of an economic boost or have a low number of visitors; educational programmes for children; and revitalisation projects in regions and core cities that suffer from declining population and a poor local economy.

Toyota in the UK:  Partnership and Competitiveness
Toyota Manufacturing UK

The final presentation was given by Rob Gorton, a former JET participant and now Corporate Planning Manager at Toyota UK. The car manufacturing giant has two plants in the UK which together represent a £2.5 billion investment, provide 3,000 jobs and generate £2.1 billion export revenue – surprisingly Japan is among the export destinations. Mr Gorton pointed out that the effects of Toyota were not limited to the economy, but also the automotive industry as many ex-Toyota engineers have implemented the Japanese techniques they acquired from Toyota at their new employers. Furthermore, their human resource development for the industry goes as far as running programmes for primary school children to prepare the next generation of engineers. Mr Gorton outlined that the success of Toyota investing in the UK was mainly due to the government’s positive attitude towards FDI, barrier-free single market access, and a high level of support from the local authorities. His closing remarks were voiced as a representative of the Automotive Council, stressing that in order for the UK to remain competitive, particularly for attracting Japanese investment, the country needs to heavily promote its strengths, understand the business realities and demonstrate commitment to building a long-term relationship.

The seminar ended with a brief Q&A session with most of the speakers on the panel. From the questions asked, we learned that the Japanese rail companies have adjusted their services to meet the needs of the elderly, and that the land required for lifestyle business projects is bought and developed by the rail companies themselves. With regards to the UK automotive industry, factors that have led to its success derives from having clear objectives and the pairing of the UK’s strength in academia and product development. Devolution has also a part to play in the success of local growth with Stockton-on-Tees outlining the benefits of having more freedom and flexibility. Gaining international recognition is one of the challenges to attracting foreign investment, and a common strategy used in both the UK and Japan is the creation of a brand for the city and promoting it through the brand. In terms of city-to-city relations, developments are easier to build on if there is a mutual objective such as environmental collaboration or joint business projects. As for the success of MICE, it is important that a city constantly holds various events and conferences to create a better name for itself.

Following the concluded seminar, the participants attended a reception allowing them to reflect on the discussions from the event.