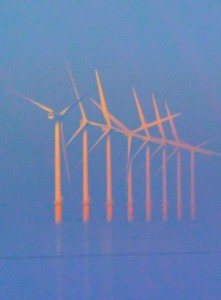 On the occasion of the fifth anniversary of the partnership agreement between Tokushima Prefecture and Lower Saxony in Germany, JLGC organised a German-Japanese conference on the theme of renewable energy. A delegation from Tokushima visited Hanover for a four day stay, and the conference formed part of the agenda which revolved around energy issues and business promotion. Both Lower Saxony and Tokushima Prefecture were JLGC’s partners in the organisation of the conference, which was also supported by JETRO Berlin, the Consulate General of Japan in Hamburg, the Japan Foundation in Cologne and JNTO’s Frankfurt office. The Leibniz University Hanover hosted the event – the beautiful and newly restored main auditorium of the institute for inorganic chemistry, built in 1909, was transformed into an international conference venue with a cabin for simultaneous interpreting and played host to more than 60 attendees.

The title of the conference was ‘Energy transition: how renewable energies are promoted in Tokushima and Lower Saxony’, and it gave representatives from both Germany and Japan, from the public and the private sector, the chance to contribute. 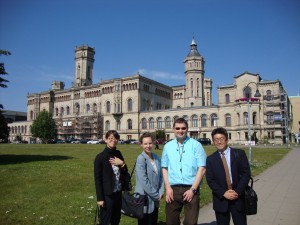 After a kind welcome from Prof. Dr.-Ing. Erich Barke, President of Leibniz University and a greeting from the Setsuo Kosaka Consul General of Japan, Vice Governor Hideo Saito presented Tokushima’s strategy to increase renewable energy production in the prefecture, including hosting large scale photovoltaic installations under the government’s ‘mega-solar strategy’ and build on its strength in the field of LED production and development, which contribute to energy efficiency.

Dr. Daniel Gelmke from the Lower Saxony Ministry for the Environment, Energy and Climate Protection talked about Lower Saxony’s achievements in promoting especially wind energy. At the current time, about one third of Lower Saxony’s electricity is produced from renewable sources. Both onshore and offshore wind energy facilities are to be promoted further, as are biomass and other renewables. However, subsidies for solar panels are to be phased out, as the weather conditions in Lower Saxony are not that favourable and the contribution of solar electricity generation has been low, despite very high public subsidies. The target for Germany is to have 100% renewable energy generation by 2050, and Lower Saxony is already on the right path.

Managing Director Shinichi Yuasa from Nichia Chemical Europe spoke about their business as one of the biggest producers of LED and lithium-ion batteries in the world. Nichia is the company which first developed the blue LED with high brightness that has made such an impact across the world, and the company is ever further developing products and applications.

Director of JETRO Berlin Hiroshi Kimoto spoke about the role of his organisation, and Japanese energy policies, and how currently discussions are underway about the future direction of energy supply. 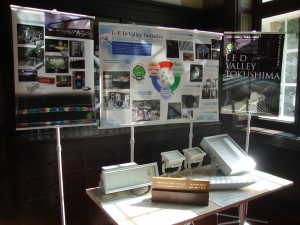 Also, Thorsten Schwanert, representing the Lower Saxony Innovation Center, spoke about the favourable conditions in Lower Saxony regarding renewable energy and electro-mobility. Given that through Volkswagen, the location is third in the world (behind Tokyo and Detroit) for automobile-related industries, the Land has been selected to host one of the electric mobility pilot regions subsidised by the federal government, whose stated intention it is to have one million electric vehicles on the roads by 2020, and six million by 2030.

As a representative of the German private sector, Steffen Brauns from Enercon, the biggest German producer of wind turbines, reported about the company’s strategies for growing their business and how they have become successful by concentrating on having very reliable technology, and providing service as part of the package. Their market share for wind turbines in Japan is 12%.

In closing, JLGC Director Yuichiro Hanyu thanked all participants and attendees as well as all the supporting organisations in Germany, in this the first such event held by JLGC in Germany. It attracted around 70 participants, both Japanese and German, from the private as well as the public sector, and it is to be hoped that the event enabled further contacts.