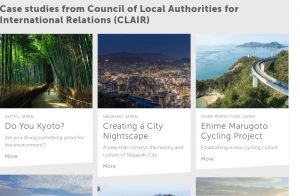 In partnership with JLGC as the London Office of CLAIR, use has now developed a series of case studies of practices among Japanese cities and urban areas, including Aomori, Ehime, Fukuoka, Kyoto, Nagasaki, Sendai and Tokyo. The case studies across the use website are also browsable by UN SDG (Sustainable Development Goals) theme.

The City of Berlin has been a member of Metropolis since 1991. The Governing Mayor of Berlin, Michael Müller, was elected President of Metropolis in August 2018 and the city also hosts the association’s Regional Secretariat for Europe since 2011.

Metropolis, the World Association of the Major Metropolises, is the global network of major cities and metropolitan areas. It brings together the governments of 138 urban agglomerations worldwide.

The use platform is managed by the Division for International Affairs of the Berlin Chancellery. Barbara Berninger is Head of Division and Metropolis Regional Secretary for Europe.

The association is the focal point of expertise on metropolitan governance. Raising the voices of metropolises to the global agenda and building capacity to deliver public policies and services, Metropolis contributes to finding common answers to the challenges of metropolisation. Metropolis operates, as well, as the metropolitan section of the World Organisation of United Cities and Local Governments (UCLG) since its constitution in 2004.