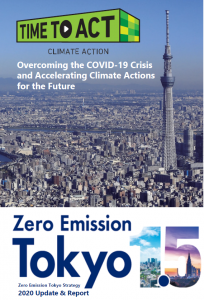 In December 2019, the Tokyo Metropolitan Government (TMG) developed and publicly announced the “Zero Emission Tokyo Strategy” with a target of virtually zero CO2 emissions by 2050.

Now, just over a year after the announcement of this strategy, with the world facing an unprecedented challenge due to the coronavirus pandemic and in light of the increasingly serious climate crisis, TMG in January 2021 announced it will reduce greenhouse gas emissions in Tokyo by 50% by 2030 and raise the ratio of electricity use from renewable energy to about 50%, in an ambitious update of environmental targets.

To achieve this goal, TMG formulated new policies with the “Zero Emission Tokyo Strategy 2020 Update & Report” in March of this year, which sets goals for accelerating and strengthening actions in the decade up to 2030 with a new ‘Carbon-Half’ target, taking this as a midpoint by which to accelerate efforts towards the final goal of zero CO2 by 2050.

Strengthening Targets in the run-up up to 2030

The main target set by the new strategy is to strengthen the goals for 2030. As mentioned above, the first target was greenhouse gas emissions from Tokyo to be reduced by 30% in the “Zero Emission Tokyo Strategy”, but the decision was taken to reduce them by 50% by 2030 (compared to 2000). In addition, the target value has been raised significantly, such as reducing energy consumption in Tokyo by 50% and raising the ratio of electricity used by renewable energy to about 50%.  Furthermore, TMG has added the goal of making all new passenger car and motorcycle sales in Tokyo non-petrol.

The new strategy encourages a societal shift in lifestyle and business models to sustainable energy consumption by 2030, with the image and vision of social change realized by then, created under the slogan “2030 Carbon–Half Style”.  To help achieve this TMG promotes behavioural change in households and by individuals, such as using power-saving refrigerators, promotion of travel by bicycle/walking, reduction of food loss and purchasing sustainable products. TMG is encouraging other behavioural changes in citizens and businesses in Tokyo, including large-scale actions by business such as the promotion of zero-emission district development as well as building and supplying highly insulated houses.

Through these measures, TMG not only aims to halve greenhouse gas emissions in 2030 but also to create a “more resilient, affluent and livable city” and an “attractive city that attracts investment and businesses.”

To accelerate actions by 2030, TMG has updated 14 policies in six fields including energy, urban infrastructure, resources and industry, which were laid out in the “Zero Emission Tokyo Strategy”, TMG has introduced 36 new approaches to achieve the “2030 Carbon–Half Style” and 94 new projects to accelerate and strengthen change immediately. For example, the development of hydrogen stations to achieve the goal of converting all vehicles used in Tokyo to ZEVs (either electric vehicles that do not emit CO2 and other emissions, plug-in hybrid vehicles or fuel cell vehicles) by 2050.

TMG provide subsidies for operating expenses, expanding the number of subsidized quick chargers, and encouraging Tokyo residents to use ZEVs for rental and car-sharing programmes.

Under the slogan “Now is the time to accelerate actions: TIME TO ACT”, the Tokyo Metropolitan Government is calling on all actors in Japan and overseas to accelerate their actions and further cooperate on having a universal goal of “decarbonization”.

See the link below for further details on the strategy.