Japan’s ‘wide area union’ system has been in place since 1995 and was introduced as a structure to accept the transfer of devolved powers as well as to create a body which could respond flexibly and efficiently to the various and specific needs of regions. Wide area unions can be established between prefectures, municipalities and special wards (within cities with ‘designated city’ status).

The union establishes regional plans and conducts essential coordination to promote wide-area comprehensive and systematic administration. As of September 2019, 117 organisations have been established but among them, the “Union of Kansai Governments” (UKG) is the only wide-area body in Japan that is made up by local authorities at the prefectural level. 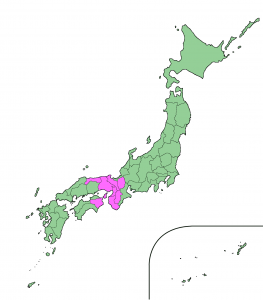 The UKG has been actively engaged in the planning and coordination of policies across the Kansai area, including region-wide infrastructural development and measures for Lake Biwa and the Yodo River area. Additionally, the UKG has promptly provided support to the areas stricken by the Great East Japan Earthquake and Kumamoto Earthquake disasters under a counterpart method and promoted tourism with the cooperation of the public and private sectors through the Kansai Tourism Bureau. The UKG also collaborated in the joint operation of the helicopter ambulance services, which individual local authorities would have difficulty maintaining alone.

The twin issues of excess concentration of population and industry in the Tokyo metropolitan area and population decline elsewhere are continuing in Japan, and the probability of a near-field earthquake in the Tokyo metropolitan area as well as an earthquake in the Nankai Trough increasing, meaning that the Kansai region must achieve a bilateral structure within the nation and a decentralised society where local matters can be decided locally.

While working to fulfil the of relocating government agencies to the Kansai area, following the relocation the Agency for Cultural Affairs to Kyoto, the UKG will continue requesting the transfer of the jurisdiction of national government’s branch offices roles to local authorities and a wide range of administrative authority of the national government to local government. 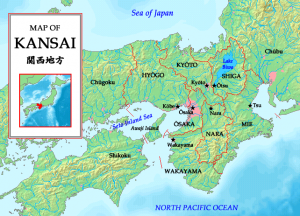 Kansai map and constituent prefectures of the region

In addition to Kansai’s so-called “Golden Sports Years,” continuing from the Rugby World Cup 2019 to World Masters Games 2021 Kansai, plus the decision to hold the EXPO 2025 in Osaka, Kansai, the world will have a keen eye on Kansai. Taking advantage of this opportunity, the UKG will unite the power of the public and private sectors and promote initiatives for the development of the entire Kansai area by making use of potential in the region.

The ‘World Masters Games 2021 Kansai’ which will be held for the first time in Asia under the theme of ‘The Blooming of Sport for Life’ is a lifelong sports festival expecting the largest-ever number of 50,000 participants from Japan and overseas, with 35 sports and 59 events at locations all around Kansai. We hope as many people as possible from the UK can take part so they can experience local life, people and culture as well as Japan’s famous ‘omotenashi’ hospitality. The expected benefits of holding this event are giving a global platform for Kansai as an area advanced in lifelong sports, further regional revitalisation through sports tourism as well as promoting sports and healthcare industries, while at the same time helping to promote a healthy society in the region.

The ‘EXPO 2025 Osaka-Kansai-Japan’ under the theme of Designing a Future Society for our Lives, will see know-how from all over the world gathered in Kansai from fields in cutting-edge life and health-related technologies. Exhibiting new innovative creation and attracting visitors from both inside and outside Japan, the event in Kansai will become a great opportunity to show the world what’s going on in the region. So that the Expo benefits the whole of the region, the Union of Kansai Governments will initiate various projects connecting the event to our constituent member local authorities.

Next year, The Union of Kansai Governments celebrates its 10th anniversary. Building on past endeavours, and looking ahead at the direction and role of partnerships in Kansai, we see further expansion of its functions toward the progression of a full-scale decentralised society.

Based on the UKG’s philosophy of one Kansai, and each region of Kansai, the region-wide authorities will work together for “the creation of a vibrant Kansai” while taking capitalising on the diversity of respective regions.