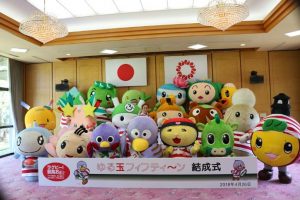 The 9th Rugby World Cup kicked off on 20 September and will be continuing until 2 November. This is the first Rugby World Cup to be held in Asia, and building on from the interest gained from Japan’s appearance at the 2015 Rugby World Cup in England, it was expected that even more excitement would be generated across the whole country at this year’s tournament.

The tournament has taken place in 12 cities across Japan from Hokkaido in the north down to Oita Prefecture in the south. The host cities are expected to benefit from the economic impact of the tournament with the RWC 2019 Organising Committee forecasting a total output of ¥437.2 billion (£2.97 billion) of which ¥191.7 billion (£1.30 billion) will be from the tournament’s direct impact.

Each of the 12 host cities also held Fanzones which offer public viewings of the matches and activities for fans to enjoy. Each city has employed different strategies to make the most of the Fanzones.

Kamaishi City, on Japan’s northeast coast, was one of the cities that suffered from the destruction caused by the tsunami during the Great East Japan Earthquake. Out of the host cities, it was the only one that did not have a stadium. As part of the strategy to raise the profile of the city domestically and internationally, and to recover from the disaster, they began preparations for the Kamaishi Recovery Memorial Stadium. The locals also formed an Iwate-Kamaishi Rugby Cheerleading Group to welcome visitors during the tournament.

Kumagaya City, in the north of Saitama Prefecture boarding Tokyo, held a series of countdown events for 500 days, 1 year and 100 days until the tournament to generate a buzz. The 100-days countdown event had a ceremony with live music performances by popular artists as well as rugby-related activities. To spread the excitement of the tournament across all prefectures, a rugby cheerleading team formed of mascot characters banded together to become the Yurutama Fifteen to join in on the fun with the locals.

Toyota City, in Aichi Prefecture to the west of Tokyo, understood that there were different needs for fans visiting from abroad and decided to hold a seminar to educate businesses in the city. This involved talks about characteristics of different visiting groups, rugby culture and beer. Also, to get locals who are unfamiliar with rugby to be more involved, the city government provided explanations about the rules of rugby on their official website.

Kumamoto, on Japan’s southernmost of the four main islands, held a series of events that had a delegation from Wales interact with the locals. As Wales took on Uruguay in Kumamoto, a Welsh delegation of six that included a former Wales player visited the prefecture in July to build relations. During this time, the group met school children, held a rugby clinic for referees and gave talks at a local high school. The prefecture’s Rugby Football Association got busy on social media with a daily countdown to everyone geared up for day one of the Rugby World Cup.