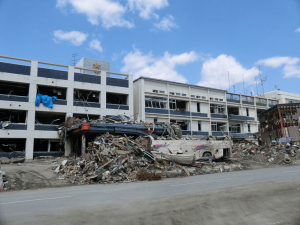 JLGC continues to partner with Metropolis’ urban sustainability exchange use on introducing Japanese public sector best practices to an international audience via their website portal of case studies.  use is an online platform dedicated to promoting sustainable urban development. It showcases successful programmes, projects and policies and connects city makers who work in this field.

Urban Sustainability Exchange (‘use’, formerly Policy Transfer Platform) was launched in 2014 as a Metropolis Initiative led and co-founded by the City of Berlin and is supported by the Institute for Culture and Society at Western Sydney University and a global network of institutional partners and award organisations.

The new case study is on a strategy based on lessons learned from the Great East Japan Earthquake.

The city of Rikuzentakata was one of the areas in Japan hardest hit by the March 2011 Tohoku earthquake and tsunami, losing about 8% of its population and 80% of its residential areas. Subsequently, the local government has established a Business Continuity Plan (BCP) which determines in advance the operational structure, response protocol, and resources required for its services to remain operational even under such severe circumstances.

The project aims to ensure the continuity of government operations by identifying high priority activities in advance, securing the necessary resources and defining the allocation method for the activities so that the city can promptly and appropriately take the necessary actions even in the event of large-scale natural disasters.

For further information about the case study, click here.

Other case studies on the use platform created based on data supplied by JLGC’s head office the Council of Local Authorities on International Relations in Tokyo includes reports on local strategy in Kyoto, Fukuoka, Kurashiki, Aomori, Ehime, Tokushima, Nagasaki, Sendai and now Rikuzentakata.