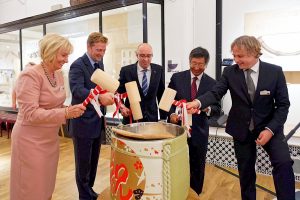 The JET Alumni Association chapter in the Midlands hosted the opening night of a new exhibition of ukiyo-e prints called “Japanese Ghosts and Demons: Woodblock Prints from the Ashmolean Museum” (external link), at Derby Museum and Art Gallery.  The event was attended by Ambassador Tsuruoka who travelled up especially at JETAA’s invitation to speak at the opening event of the Derbyshire-Japan season of culture programme of events, of which this event was the start.

Giant spiders, dancing skeletons, winged goblins and hordes of ghostly warriors are among the subjects depicted in this display of striking 19th-century woodblock prints, drawn from the items borrowed from the Ashmolean Museum, the University of Oxford’s museum of art and archaeology’s rich collection of Japanese art.

The exhibition includes 24 colourful ukiyo-e prints, including a number of dramatic multiple sheet images that have rarely been on public display before. It focuses on works by the celebrated print designers Utagawa Kuniyoshi (1797-1861) and Tsukioka Yoshitoshi (1839-1892), two of the most prolific and successful artists of their day.

Also speaking at the event was Rob Gorton, Chairman of the Midlands chapter of JETAA, as well as Chairman of the JETAA UK national committee from March 2019.  The other speakers were Ambassador Tsuruoka, the High Sheriff of Derbyshire Lord Burlington, and Marvin Cooke, Managing Director of Toyota Manufacturing UK, who all launched the Derbyshire-Japan Season of Culture alongside numerous VIPs, including the Mayors and Youth Mayors of Derby, leader of the county council and JETAA alumni working and living locally.

Speakers outlined the importance of economic links, civic partnerships and cultural engagement to develop inclusive societies – themes of the Season of Culture in the region. Attendees were able to network while enjoying Japanese food and sake from Dojima Brewery in Cambridgeshire.

The event was organised and funded by JETAA in partnership with Derby Museum. It coincided with the launch of not only ‘Ghosts and Demons’ but also ‘Powerful Nature’ – an exhibition of Japanese watercolours, prints and exhibits from Derby Museum and Art Gallery.

Recent years have seen huge interest in all things Japanese in Derbyshire around the link with Toyota City in Aichi Prefecture which celebrated its 25th-anniversary last year, as well as the presence of Toyota Motors UK in the county, and a ‘Derbyshire-Japan Society’ has been established as part of the Season of Culture – JET alumni in Derbyshire and the Midlands are very much welcome.  Please e-mail ag@d-jsociety.co.uk if interested.

There was special appreciation from speakers including the Ambassador for JETAA’s support for the event – the Ambassador, in particular, expressed his hope that Season of Culture events involving JET alumni would become a feature of the coming year.

JETAA chapters are supported by the Japan Local Government Centre and the Embassy of Japan.  For more information about activities and funding for events throughout the UK please see www.jetaa.org.uk