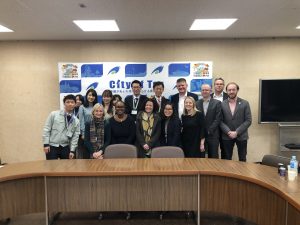 After a break of three years working in the higher education sector, I returned to local government in July with a renewed love for councils. One of my very few regrets about leaving higher education was losing the opportunity for travel with work. In universities, such travel is considered quite normal, and in March 2019 I was hugely fortunate to travel to Singapore to speak at a conference. I was very sure that there would be no more of that!

In September last year I was reading the MJ and saw an article about the Japan Study Tour run annually by the Council of Local Authorities for International Relations (CLAIR) who operate in the UK from the Japan Local Government Centre in London. They were looking for people to take part in the January 2020 week-long tour of Tokyo and Tsu City. I’m a big Japanophile – we watch NHK World, the Japanese version of the BBC World Service, as our main TV channel and I have loved sumo wrestling for years – and in a hubristic moment I decided to apply. I was sure it was aimed at Chief Execs but I reckoned nothing ventured, nothing gained.

I was hugely surprised, and got immediate imposter syndrome, when I had an email in October to say I’d been accepted on the trip. Fortunately I had checked with my senior management team before applying, so I made the arrangements and in January I took the 14 hour trip to Tokyo, flying over Siberia, to join the tour and see how local government operates in Japan.

It was the trip of a lifetime with learning and experiences that you couldn’t get in any other way. In Tokyo we learnt about the structure of local government from Professor Shunsuke Kimura of Meiji University, the ‘My Number’ identification system, technology that supports social care and the cap and trade programme for carbon emissions. In Tsu City we saw what I would regard as ‘normal life’ away from the capital: it’s a rural county with an average size city and faces many of the challenges we experience in Derbyshire with an ageing population, the movement of younger people to the capital and social isolation. There we learnt about community support schemes to reduce malnutrition in the elderly and to encourage prevention of ill health (and hence demand), a bus pass scheme to reduce isolation, renewable energy generation through biomass and wind power, recycling and business support initiatives. I was struck by how similar the challenges are in Japan to those in the UK, and how they have employed very similar solutions. Hard to solve problems clearly remain hard to solve, wherever in the world they occur.

There is a lot that local government in Japan has got right. Councils have a very independent role and a huge amount of local autonomy, and the tax system gives them a surety of finance and fundraising powers that we would love in the UK. There has already been much devolution in their two-tier system (much of it driven by the equivalent of counties) and more is on the way. Local government roles are sought after and respected, and twinning relationships matter a lot. The Japanese are very keen to learn from the experience of others and to bring the best in to their system and to share their experiences in return.

There are other interesting contrasts: a lot of working culture is what we would regard as traditional, with some offices being similar to those that we operated in 20 years ago. Fax machines are common and I was asked, in very polite but incredulous terms, about ‘teleworking’ and how we could trust people to work away from the office. An ‘end of the working day’ tune sounds at 5.15pm in some buildings and people commonly move around local government roles rather than specialising. Planning rules are fascinating: perhaps driven by the need to rebuild after the Second World War (as an example 70% of Tsu City was destroyed), concrete box buildings sit alongside temples and traditional houses. Planning permission cannot be refused on the basis of design and loose zones allow for a juxtaposition of buildings that would never be allowed here.

From a comms point of view there are really interesting contrasts. When presentations are given a huge amount of technical information is conveyed rather than the storytelling, ‘hearts and minds’ approach we’ve adopted here. Work with communities and businesses seems to be easier: the Tokyo ‘cap and trade’ emissions system requires businesses to put in energy-saving measures at their own cost. When we asked how much this was costing local businesses (which is one of the first questions we would be asked by a journalist here) those running the scheme didn’t know. That wasn’t really the point: it had been decided that was what was needed, so businesses should do it (and, even in the fairly early days of the programme, 70% had). More residents participate in schemes to look after neighbours than we ever see in the UK perhaps because there is a culture of not only personal but societal responsibility. It means the landscape of communications is very different than that which we experience and it underlined the need to me to really understand your audience. And they LOVE a mascot. Cities, towns, companies, everything has a furry mascot character: Tsu City has a tree fairy and a rice cake with a samurai helmet. We met them (aka Comms people in the costumes) and they were brilliant. Nominally they appeal to children, but everyone loves them. Try bringing in a mascot at your council and see how it goes down.

People talk about Japan being a hugely different culture but I didn’t find it so. The language is certainly very different and the food is different (and amazing). There is advanced technology in some sectors but there aren’t robots on every street corner, although the toilet seats are brilliant. The Japanese are lovely people: kind, generous, quiet and unassuming, and in some ways not dissimilar to the traditional English gentleman image. I felt very comfortable indeed and it’s one of the few places I want to go back to (usually I’m ready to move on to the next place after a visit).

I have never been so well looked after in my life and it was a huge privilege to not only see working life but to be taken to temples, on the bullet train past Mt Fuji and to a traditional inn. I made new friends of those who were on the trip with me and the kindness and warmth of the CLAIR staff, the local government employees and the businesses we visited will stay with me for a long time. As will the bellowing of nine British, one French, one Japanese and one American singing 80s tunes in a Tokyo karaoke bar.

Give CLAIR a follow on Twitter @jlgclondon and check out #JST2020 to find out more about the trip. If your council will let you, get an application form in for the next tour: if they’d ever have me back I’d be there in a heartbeat. And get a mascot: tell your Leader they are big in Japan. 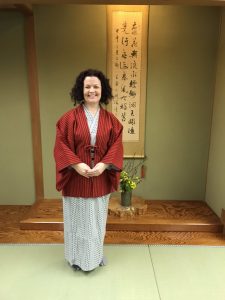