2019 marked the 30th anniversary of Germany and German-speaking countries taking part in the JET (Japan Exchange & Teaching) Programme, with an event held by JLGC, the German Language JET Alumni Association and the Embassy of Japan in Berlin, at the Embassy in November.

The reception was attending by some 120 people from all over Germany and Europe, participants in the programme placed in every region of Japan for one to up to five years, as well as invited delegates from other JETAA chapters in Europe, from the UK, France and Republic of Ireland. CLAIR Chairman Mr Okamoto also attended the event to give a speech about German participants contribution over the last three decades and their support for relations between the regions of Japan and Germany, as well as Austria and Switzerland. Japanese Ambassador to the Federal Republic of Germany Mr Takeshi YAGI also gave a speech, and the gathering additionally heard an address from Chairman of the German JETAA Sven Traschewski. 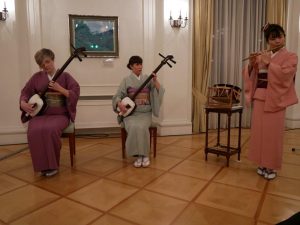 Guests were greeted upon arrival at the venue by performances from a local Berlin-based traditional shamisen group who played throughout the evening, and the all-important kampai was given by Mr Vino Cecere of the German Federal Foreign Ministry, Representative for Foreign Science, Education and Research Policy and Foreign cultural policy.

The JET (Japan Exchange and Teaching) Programme was established in 1987 with the purpose of increasing mutual understanding between the people of Japan and the people of other nations. It aims to promote internationalisation in Japan’s local communities by helping to improve foreign language education and developing international exchange at a community level.

JET participants are selected from 73 countries to fill the post of ALT (Assistant Language Teacher), SEA (Sports Exchange Advisor) or CIR (Coordinators for International Relations). The ALT and SEA posts are usually based in local schools; the ALTs provide language instruction (predominantly English) in schools; the SEAs promote international exchange through sport whilst the CIRs are based in town or city halls and work in the community on international exchange activities.

The recruitment of the JET Participants is conducted by the Japanese Embassies and Consulates in each respective country, and each potential applicant (after screening) is interviewed. Once the successful candidates have been announced, a series of seminars is organised to induct the applicants into what is required of them whilst they work in Japan, and ex-participants are invited to give advice based on their experiences. Each contract is valid for one year, although the opportunity to extend may be available. All JET applicants must be graduates, and if they have dual Japanese citizenship, this must be renounced before they can complete the application process. Japanese language skills are not required unless the applicant wishes to apply for a post as a CIR, but participants are given some text books and the local authorities may hold Japanese language classes once the participants arrive in Japan.