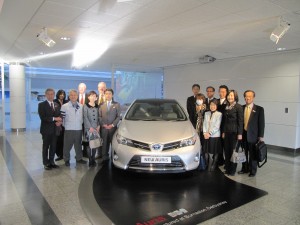 Derbyshire continues to strengthen links with Japan and the city partnership with Toyota City in Aichi Prefecture.  Derbyshire County Council, Derby City Council and South Derbyshire District Council in 2018 saw the local authorities celebrate 20 years of Japan in the region, after all three were key players in attracting the car manufacturing giant to the county bringing thousands of jobs to the area. Since then, the councils in Derbyshire and Toyota City Council have been working together to benefit the economy, environment and education.

Toyota City in Aichi province was re-named after the motor manufacturing corporation 70 years ago and is celebrating this anniversary this year.  On Saturday 6 March one of the commemorative events was a virtual international conference to consider the ways in which COVID-19 has impacted on the capacity for countries to reach the UN Sustainable Development Goals.

The Toyota City Partnership in Derbyshire and Derby was represented by Sarah Burkinshaw who contributed to the discussion on sustainable energy.  The session highlighted how the use and consequences of energy varies across nations.  In Shah Alam, Malaysia, the issue was making air cooling systems more efficient, while in Derbyshire one of the options for heating homes is the potential use of geothermally heated water in disused mines. Toyota City Council has a public and private sector shared platform for SDG discussion and innovation and Mayor Ota invited the contributors to join this platform.

In the UK, and as part of the Japan-UK Season of Culture Sakura Cherry Tree Project, a total of 32 cherry tree saplings have been planted at Bass’ Recreation Ground in Derby to mark the partnership between the city, Derbyshire and Toyota City.  At just 1.5 m high, it will take a while for the sakura cherry saplings to fully mature, but in as little as four months after planting the first signs of spring blossom will appear. Once the trees become established, visitors to the park can look forward to enjoying the Japanese tradition of ‘Hanami’ – enjoying the glorious seasonal display of beautiful flowers and picnicking under the cherry blossom.

The trees were planted by the Derby Parks team. A formal dedication ceremony is planned for spring. Hundreds of sakura cherry trees have been gifted to the UK through a bidding process from the Japanese Society.

Since 1998 the relationship between Toyota City and Derbyshire has created opportunities to work in partnership on projects including education, sport, tourism and environmental sustainability while also supporting the company, which employs over 2,500 people in Derby.

The Toyota City Partnership Board (TCPB) was set up in 2018 to develop opportunities across education, culture, economy, environment and sport, with the three councils joined by a wider set of partners from education, economic facilitators, tourism facilitators and the National Forest.

The tree planting is part of a wider project, with a total of 100 trees being planted at Bass’ Recreation Ground, Shipley Park, and Swadlincote. A further 63 trees are going individually to schools and colleges, mainly in Derbyshire.