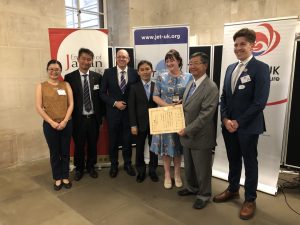 JLGC staff attended the annual JET Programme Pre-departure orientation at SOAS in London in July to give information on support and training available on offer from CLAIR (JLGC’s parent body) for around 230 new participants on the programme this year.

Participants are placed with a local authority in a local government area (the Contracting Organisation) which is their employer. Participants will fly out to Japan in August for the start of the Japanese school summer term in September.

There are 47 prefectural governments and 12 city governments participating in JET, as well as numerous individual city, town and village governments and some private schools designated as Contracting Organisations, in semi-rural or rural placements, and participants may be placed anywhere in Japan.

In total, in 2019 there are over 500 UK graduates working as Assistant Language Teachers or Coordinator for International Relations (with business-level Japanese language skills), as well as around 120 from the Republic of Ireland and smaller numbers from Germany and other countries in Europe.  There are currently 5,528 citizens from 54 countries living and working in Japan on JET.

This year also was also marked with a special ceremony and presentation given by the Japanese Ambassador to the United Kingdom Mr Koji Tsuruoka to Sarah Parson, who was until this year chair of the JET Alumni Association (as well as local staff member at JLGC in years gone past).

Sarah was chair from 2014–2019 and led on a series of projects such as the 30th anniversary event at the House of Lords held in partnership with the British-Japan Parliamentary Group, the relaunch of the annual Careers Information Day as well as a range of events around the country and in conjunction with partners like the University of Nottingham and Toyota Motors UK.  Sarah will still be involved in the Midlands chapter, where she is based while the baton is passed onto Rob Gorton, also based in the Midlands and Chairman from January 2019.

Many thanks to Sarah from JLGC for her huge contribution and efforts to bring together the JET alumni community as well as congratulations for some very successful events and establishing partnerships with organisations now supporting JETAA UK.

JETAA UK and JLGC give ongoing support to JET alumni, whether they have just returned from Japan or have been back in the UK for some years, with careers events and support, with job listings, a mentor system for a variety of professions, training and CV counselling, details of which can be found on the JETAA UK website HERE.

JETAA UK is sponsored by the Embassy of Japan in the UK, as well as Japan Local Government Centre, London who provide the current five active chapters of JET alumni around the UK with funding for activities, to continue supporting the aims of the JET Programme and grassroots links between Japan, the UK, the Republic of Ireland and Germany.  Sign up for the JETAA newsletter ‘JETLAG’ for regular details of UK activities and opportunities to get involved HERE.